Felix Zaska was cast onto the shores of Ireland from Bavaria at the age of 15, attended Boarding School and graduated from Trinity College Dublin. Having moved from the Irish Sea to the Wild Atlantic in the West, he now lives and works as an artist and art photographer in Westport on Clew Bay.

His professional background includes decades of studio and location photography in Germany and Ireland. He also lectured photography and studied Oceanography due to his interest in Clew Bay and the Atlantic.

“As a photographer and sailor, I have always had a special relationship with the wildness of the West of Ireland, the ever changing light and the free spirited people around Clew Bay, Mayo –  direct descendants of seafarers and pirates. “ Based in Ireland since school times Felix is considered ‘Irish by osmosis’ by his family and friends.

Since his Millennium Art photography Exhibition “Countdown to Eternity” in Jan/Feb 2000 at the  Guinness Hopstore, Dublin,  (http://felixzaska.com/hopstore/countdown to eternity )

his main focus has been working on visual ‘Raw Art’ projects in Mixed Media, Painting, Sculpture and Art Photography.

” I see myself as an anti-establishment artist in my own individual space outside big data social media platforms. My genre could be described as apocalyptic raw art reflecting a ‘….world in a terrible state of chassis’. (Sean O’Casey). All my work is centered around time, space time, eternity and the concept that …’ Time is an Illusion…’(Albert Einstein) “ 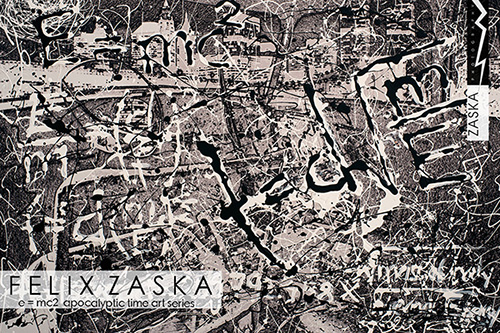 Pyramids of the Apocalypse

Essential Cookies are used on this website. Data is only stored for one hour on the system and not transferred to third parties. Continuing to use this site we assume that you are happy with it. Ok